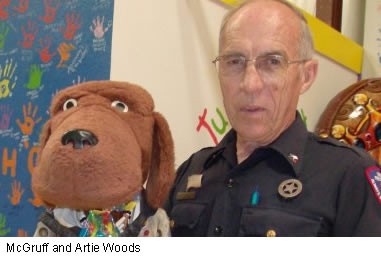 Officer Artie Woods has had an outstanding career in law enforcement beginning in 1966.

He and the crime-fighting dog have teamed up since 1984 and taught thousands of people, especially children, how to be safe from crime.

Although the Artie Woods-McGruff combo first teamed up in Wichita County, they have been world travelers, taking the message across state lines and even continents.

Artie and McGruff started their campaign together at Dinsmore Elementary School in Electra, Wichita County, Texas, according to an article by Milessa Millender in the Wichita Falls Times newspaper in 2009.

Woods started out in law enforcement with the Wichita County Sheriff's office in Wichita Falls.

He said in an interview in the Times, "People used to make jokes and leave dog bones by my car in the early days."

Although the national campaign actually started in 1979 when Woods was in school, he said he started it locally in 1984 and has continued his globetrotting career with McGruff ever since.

Later Woods worked as a deputy with the Archer County sheriff's office.

Throughout his law enforcement career he has taught thousands of children safety and probably saved many lives.

During his career Artie Woods has taught thousands of children about how to be safe from all types of crime including internet and automobile safety.

"I always buckle McGruff up in the car in his seatbelt when we travel to a school to talk to the children," Woods remarked.

McGruff is popular with all groups from kindergarten through high school.  Woods' daughter said that her father even spent his own money to update his personal automobile so that it matched the car which is now used nationally as the icon for McGruff's car.

But it was the former teacher and later principal at Dinsmore Elementary School who first invited Artie and his crime fighting dog to their first school event and re-invited him to celebrate the 25th anniversary of the fabulous work this dynamo duo has accomplished.

Wichita Falls should be proud of this native son who has done so much over the years to help protect our children from crime.

Although the world is a different place than it was when he started, there is still a place in it for Artie Woods, McGruff and Artie 'Dillo'.

McGruff is the famous dog who has been teaching children how to "take a bite out of crime".

Artie Woods and McGruff have teamed up for 26 years.

Artie 'Dillo will be the new face of the Texas Crime Prevention Association (http://tcpa.org)

Woods said it is an honor to have the new mascot named after him.

The new mascot Artie'Dillo will debut in 2011, but McGruff, the crime dog, will not be forgotten.

Woods also added, "You can do the exact same thing with it (Artie "Dillo) that we do with McGruff, except it's going to create a new wave of interest".